Living in the land of cheese, I'm a relative late-comer to indulging in the world of fermented milk. I have not tried many cheese to date either. But I am beginning. And here are the results: 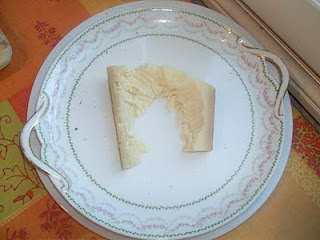 Interesting report. It obviously didn't affect my ex, who got secret botox shots before we got married. He told me he had to see an "eye doctor." I was told to wait in the car. I thought that was strange so I wandered into the waiting room of this "doctor." It looked like a spa! I was amazed if this was supposed to be an eye doctors office. I told the receptionist I was waiting for my fiance. Then I looked around and saw the Price List for the spa treatments, including botox. At first I waited inside, reading a magazine. Then I thought, if he didn't want me to know, I didn't want to embarrass him. Gee, I was naive and nice then. So I went to wait back in the car. I confronted him saying it didn't look like an ordinary eye doctor's office and he confessed.

More Gypsies - Trying to Catch Me!

On my way to a playgroup for Simon (well, a State-sponsored play-area for children up to 4 yrs. old), I walked past Gypsy-Central. There was a woman with a toddler, sleeping on her lap. (How do they get those kids to sleep and lounge all day long?) There was an old woman with a young boy, just standing on the sidewalk, not far from the first set. When they both saw me they began their refrain-of-sorrow.

Then, at the corner, a bunch of children ran up to me and waved money saying, in French, "You dropped this! Here! Your money!" They were waving 20 and 10 euro bills at me. I thought, "what? 20 euros? I dropped that? But my wallet's inside my bag and I never took it out! Gee, that's a lotta money waving around down there..."

I looked at them stony faced and just said, "that's not my money." (Should I take it and say "thank you?!") Then I remembered one of the classic Gypsy tricks and grabbed my bag to make sure it was still closed. Safe. Wallet's still inside. When they realized I wasn't going for this trick, they ran down the street waving their money screaming, "it's the man on the scooter! Get him!"

I am sure in the scheme of things Paris is not the smokiest or most polluted city in Europe. To this non-smoker however, I feel as if I am constantly waving away cigarette smoke and huffing out sooty breaths from buses and metros. Perhaps I am more sensitive to this because Paris is inland, and is in a rut. Seriously. According to BlurtIt The elevation of Paris, France is a mere 129 meters, or 423 feet. Paris lies in a depression. (No kidding) "It gets very little wind to move the air around and can be cold and damp in the winter and extremely hot and humid in the summer. There are many grey days when the smog and low clouds just sit there."

Thumbs Down for H.A.N.D!

We were hoping to bite into some savory juicy burgers "Americain" at H.A.N.D. (Have A Nice Day) in Paris. But we were all disappointed. The burgers were mediocre, there was hardly any cheese on the cheese-burgers, the cokes were flat, the onion rings looked like they were frozen Oreida, the milk shakes were watery and my strawberry cupcake tasted like nothing. There was no service to speak of, they didn't bring enough water and we were there for three hours. Man! When it rains, it pours--and it poured all week in Paris, so I guess we topped off the week in a deluge of disappointment! Mince alors!

The NY Times seemed to think it was great though: http://tmagazine.blogs.nytimes.com/2009/12/07/a-hamburger-in-paris/

This place is being touted as part of the New Brooklyn in Paris, the "Best Burgers in Paris, " "Vrai NY in Paris." I beg to differ!