Doing some research while writing my book I went to the NYS Small Claims website. The first link that caught my eye was "Kids Corner." What the heck?! A kids corner? How many kids are going to Small Claims court?! How many people are taking their children (for whatever reason) to Small Claims court. Gee. Have times changed? Or is technology just meeting our society where it is/was?

And: they have COLORING BOOKS you can download! In French AND English! Whoa.... 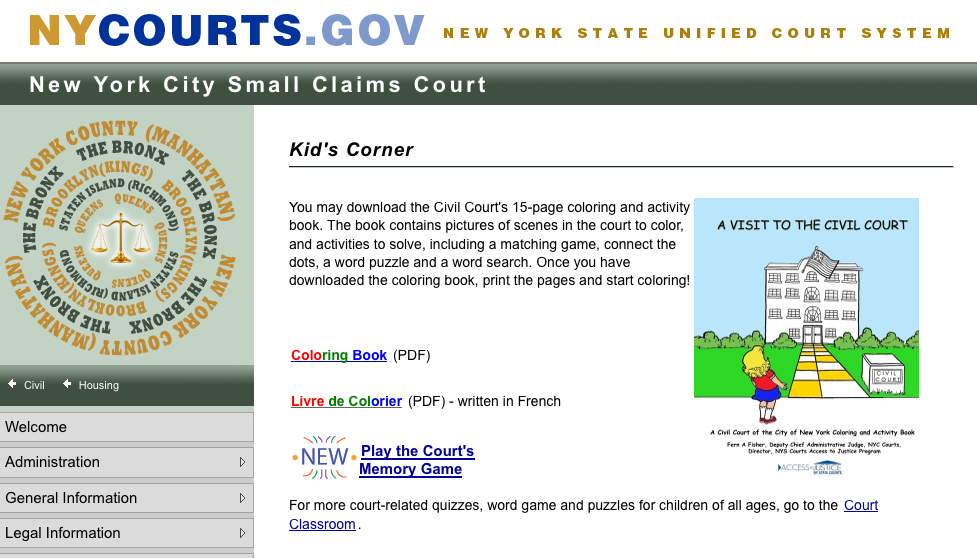 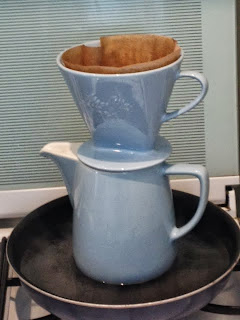 Visiting my father in February I noticed how the coffee he made was delicious. Every time. And, as he's been doing for over 40 years (maybe all his adult life, not just mine), he makes his coffee the traditional way with a Melitta porcelain coffee pot and filter.

Back home in France, these classic items are not to be found. No where. Except on e-bay. So, after a few more months of terrible tasting coffee from my automatic coffee maker (a Rowenta), I bought these items (below) separately.

I'm even more happy that they are in this pretty pale blue color!

And so, this morning I was able to finally brew my own coffee, the old-fashioned way. And it was absolutely delicious! So smooth and fine... Thanks Pop!

It was a few weeks ago when I went out with two girlfriends for dinner. It had obviously been a long time since I'd had a girl's night out and this occasion was for a birthday dinner. After we got settled in our table and a few moments after we'd ordered, I leaned forward and whispered, "can I ask you a personal question?" They leaned in, I'm sure not sure of what they were about to hear...

"Where do you get your eyebrows done?!" They leaned back, a bit relieved, I think, that the question wasn't too personal too early on in the evening.

"I dye mine because they are so light; and I don't pluck."

Huh. Encouraging but not totally helpful. The conversation delved into how French eyebrow bars pluck too much to how French coiffures just have one style they like and only cut that despite what you ask for. But then the conversation really piqued my curiosity.

One of my friends doesn't even shampoo her hair! And the other one had known about this trend! It's called the "No 'Poo Movement" and it's all about not using commercial shampoo and conditioner. There are people who've joined the movement in an attempt to reduce their use of plastic. By not buying shampoo bottles they break the cycle of using plastic, adding to the recycling problem and help the environment. The other "feature" of this revolution is that by using all natural ingredients to wash your hair, you save money, don't put chemicals on your hair and actually (apparently) help your hair be more healthy but letting the scalp return to its normal natural balanced state. Apparently using (or overusing) shampoo creates an unnatural environment for your hair, producing more oils and creating that vicious cycle of having to wash frequently because your hair gets greasy.

The secret is baking soda. Huh. My father has been using baking soda to clean with for decades! Could it be he was onto something, once again, before it was trendy?!

As I write this, I faintly recall an article where a friend of mine was featured in the Wall Street Journal about this very topic. Back in 2004 or so.

Anyway. I was riveted. I asked questions. I got answers. And I decided to try it.

On phone with Rebecca.

This morning Simon went to  a Bal Traditionnel at a stadium in Paris. The teacher said the parents could come but we had to be discreet because the children could be already very impressionne. I didn't know what to expect because my mind floated to balls with fancy dress in gold and mirrored ballrooms. This was a gymnasium and they were told to wear dark pants and sneakers. T-shirts were provided. This ecole also color-coordinated each class, providing a little colorful neckerchief for each child to wear. Simon's class had orange neckerchiefs.

So we went to the stade and sat in the bleachers. The first problem was that there were not many parents so it was hard to be discreet as we stood out like sore thumbs and it was a small gymnasium. The second problem was that all the other parents were sitting down in the first row and were waving and calling to their children.

Harrumph! Well. If all the other parents are "breaking the rules," then why shouldn't we? I don't want little Simon to think his parents didn't love him enough to show up at his first bal! (Of course there were only three other parents there...)

So. What is this bal?

So after about three or four dances I started waving and smiling and of course little S finally saw me and was all excited and waving and pointing and smiling back! Then I complained how our pictures are going to be terrible because we're all the way on the other side of where S is so we can't see him as well. Dear hubby agreed to move to the other side of the stade. We moved. Now we couldn't see S and smile and wave at him when he was sitting down. We were able to see him better for the dances though.

Then I got worried he was going to get in trouble because he kept jumping up and looking back at us now and waving like the little girl next to him. Shoot. And Muriel (the maîtresse) told us to be discreet!

All was well until the dance was finished. Simon's class was going up into the bleachers to get their coats but Hubby wanted us to leave immediately before he saw us leave.

I was afraid of leaving before he saw us because I didn't want him to feel abandoned. One minute we're all laughing and waving and the next minute he doesn't see his parents anywhere. So I stayed so I could wave goodbye to him. Uh oh. Now he started crying. Damn. My worst nightmare. Now he's crying and I don't know if I'm allowed to go down and comfort him and say "it's going to be alright little guy; don't worry, we'll see each other soon enough..." Muriel has reprimanded me before for lingering too long with S when he's crying... What do I do now? Isn't this a unique situation? Besides, all the other parents were staying and some were even putting their coats on their children! Aaaargh!

So I kept walking backwards upstairs and smiling and waving and saying, "bye-bye sweetie" and "we'll see you later!" What a nightmare.

I went to a glass window looking out onto the gymnasium and saw him sitting all by himself, alone, with his jacket on, CRYING! Oh God!

Finally I had to just go towards dear Hubby, nagging me to just leave already!